In one of the first cases of its kind, eastlaw represented the Borough Council of King’s Lynn & West Norfolk in prosecuting Mr William Loasby, of Downham Market, under the new Anti-Social Behaviour, Crime and Policing Act passed earlier this year. 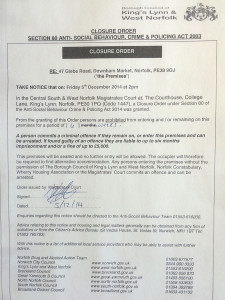 Mr Loasby was described as “a neighbour from hell” who hosted a 10-hour rave resulting in being kicked out of his home over Christmas following a landmark legal ruling.

Magistrates have granted a closure order on the property, which prevents occupiers and others from remaining there for a maximum of three months.

Emma Duncan, prosecuting, said furious neighbours called police after pictures hanging on their walls began to shake.  When officers turned up to the house they found themselves outnumbered by revellers with around 30 people under the influence of alcohol or drugs.  Ms Duncan had told the court how Loasby repeatedly refused to turn the music down when asked by neighbours and council officers.

Ian Cooke, presiding magistrate at King’s Lynn, said there was ‘no other way’ to prevent disorder for neighbours and Loasby was banned from the housing association-owned property for six weeks.